We've now lived in Taiwan for just over a year and things are looking better than ever. We recently moved into our dream apartment, with cable and air-conditioning, in a building with a karaoke room and fitness center, and our Chinese is coming along steadily, slowly but surely.

Though we've always been happy in Taiwan, it's taken us a year to feel comfortable here (though, especially with the language barrier, we're aware that comfort possesses many variants). And, to celebrate both our newly achieved comfort as well as this 1-year anniversary, I wanted to highlight some of my thoughts and observations from this past year. 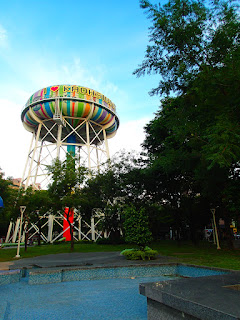 Number one on this list is how amazingly friendly Taiwan's people are and how this observation cannot be overstated. Although, when one first says a place is friendly, one may picture something akin to Mayberry, with smiling strangers and neighborly hellos, but this is not the type of friendliness that I've found in Taiwan. Taiwan's friendliness is of a different breed.

An example might be the apologies that are constantly being made by locals for not speaking English, as though they're supposed to know it. Or, if you're identified as someone who speaks English, having locals approach you with requests for tutoring or being engaged by strangers in bizarre small talk just so they can practice their English.

Husband was recently riding his bike home from work when some stranger driving passed him forced him to stop so she could practice her English, along with requesting Husband's tutoring services. (Because all English speakers are tutors here.) I remember once, in Seattle, someone driving passed me while I was on my bicycle trying to stop me, but that was because he wanted to beat me up for riding my bike and not because he wanted to engage in friendly chitchat or to request any services I may have been able to provide him. In the States, and in the UK, there are people who consider it a personal insult if you commute via bicycle.

Which brings me to my second example of Taiwan friendliness, the drivers. Drivers here are patient and considerate. When the concept of road rage is introduced in conversations it is met with confusion and disbelief (as it should be). Drivers will usually provide pedestrians and bicyclists ample room and are usually on the lookout for them (except, inexplicably, when opening their car doors). Driving is typically slow here, to allow for the odd pulling out or random stopping and, though I'm often irritated by the drivers because of their slowness / randomness, I definitely respect their patience and appreciate their consideration.

Another example of the friendliness of the locals takes place when friendliness matters the most, after an accident. A friend of ours was involved in a minor scooter accident when a random witness ran over to help her. Once it was determined that she was okay, the person just kept apologizing on behalf of Taiwan. "Taiwan is sorry," was the repeated refrain. Similarly, there was a horrible and tragic accident involving a color party and explosion in Taipei earlier this year where someone in Husband's training cohort was badly injured. Pages dedicated to his recovery on Facebook and GoFundMe are littered with locals apologizing on behalf of Taiwan. "Taiwan is sorry." It's a lovely sentiment and one that I've never heard anywhere else. It's a distinct breed of friendliness when random, uninvolved people apologize on behalf of their country.

Other observations I've made relate to an article I recently saw discussing the South Korean belief that electric fans will cause their death if employed while sleeping and comparing this notion to the American belief that you have to wait an hour after eating before swimming or risk crippling stomach cramps which will result in your drowning. Both of these are apparently cultural quirks, unsupported by science yet perpetuated by society. Over this past year I've made some similar observations, identifying at least one additional American case and a few of Taiwanese origin.

The American case involves my recent discovery that locking my knees, a fear I've possessed since childhood, will most likely not cause my death. Though this fear has never really caused me any problems, besides the occasional semi-embarrassing conniption, it has caused a lifelong obsession with and hyperawareness of the status of my knees.

It was actually one of these semi-embarrassing conniptions, occurring at my first yoga class here, which resulted in this discovery. The instructor came over to adjust my stance by physically pushing my knee into a locked position. Because of my fear, it was not an easy correction for her to make. We silently fought a battle of strength and will and, eventually, she gave up (most likely due to time constraints as well as the trapped animal sounds I may have been making). But, she has been vigilant with these corrections and it has caused me quite a lot of mental and physical discomfort.

Talking with one of my local friends about these repeated corrections and my fear of passing out / death as a consequence of the instructor locking my knees, I was met with confusion. My friend had never heard of this "locking knees" malarkey. After some research, I am now aware that this fear is bologna and I have been working very hard at overcoming it. If I don't, I'm now terrified that my instructor will continue with her corrections and the strength she customarily employs to correct my soft knees will be met with my newly weakened will and an over correction may occur. Hyperextension is real, folks. (Right?!) 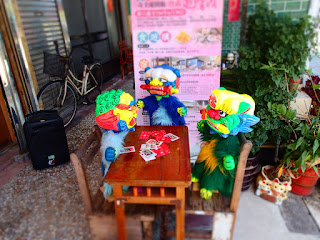 Another example of cultural misinformation occurred when I went out drinking with a Taiwanese friend. Surprisingly, on this particular occasion, she happened to be abstaining from alcohol. Confused, I asked her why and she said it was because she was on her period. I asked, "What does that have to do with drinking alcohol?" She replied, "You're not supposed to drink alcohol when you're on your period." I have never before, nor since, heard about this belief. I'm not sure if it qualifies as cultural misinformation if only one person believes it but, for these purposes, we'll go ahead and give her the benefit of the doubt and blame society.

Finally, it has been said on more than one occasion here in Taiwan that eating beef makes you angry. One of the few cultural misinformations with an origin story, some people say that this idea was developed as a way to protect the farmers' hardworking animals from becoming dinner. With no similar theory to protect the other farm animals, at least we can all agree that pigs and chickens are nothing but moochers and deserve to be dinner.
at 2:18 PM 2 comments: